You are here: Home / Stewart Painting News / Gathering The Kings 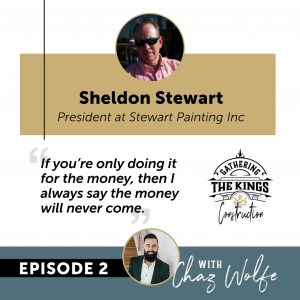 Sheldon Stewart joins host Chaz Wolfe on Episode 2 of Gathering The Kings Construction Podcast. With over 3 decades of experience in the painting industry, and a successful 7+ figure painting business, Sheldon is a king in the construction industry and shares from his wealth of real insight and wisdom he’s picked up along the way.

In this episode, Chaz and Sheldon discuss how to set yourself apart from your competitors, the importance of constantly getting better, and how to build systems and processes to facilitate growth. Tune in now and start growing your business!

During this episode, you will learn about;

“I wanted to do or be something more than someone that had five or six or 10 houses in front of me.” – Sheldon Stewart

“I realized in our industry, there’s so many people that have a ladder and have a truck and they have a name on the side of it and THAT’S their company.” – Sheldon Stewart

“I was just always trying to find a way to stand out.” – Sheldon Stewart

“People always say, ‘Debt is bad. You don’t want a lot of debt.’ For me, if I looked back, that debt created me, it made me WORK.” – Sheldon Stewart

“You’re probably not gonna make money unless you build your brand in that industry to be at the highest point that you can get it to.” – Sheldon Stewart

“If you’re only doing it for the money, then I always say the money will never come.” – Sheldon Stewart

“No one likes change. They like the results to change, they wanna lose the 20 pounds. They just don’t want that thing in the middle called the diet.” – Sheldon Stewart

“I never stick my head in the sand and say, I can’t learn anything today.” – Sheldon Stewart

“If I’m the smartest guy in the room I’m worried.” – Sheldon Stewart

“But I think the reality is that there’s a lot of guys, they just they have a side hustle, they have a little thing that they just dabble with.” – Chaz Wolfe (Host)

“The differentiator is that the guys who took it seriously probably had a uniform. They probably carried themselves in a specific way. They had clean vehicles or whatever the thing was down the line. It wasn’t just, ‘Hey, I’ve got a paintbrush, a ladder and a truck’.” – Chaz Wolfe (Host)

Reposted with permission from Gathering of the Kings 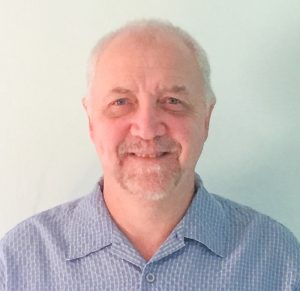