You are here: Home / Community Support 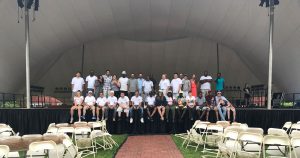 Giving back to the community is very important to Sheldon. As a member of the steering committee for the Pops by the Sea, Sheldon and his employees donate towards the setting up each year.

The Cape & Islands United Way is a local and independent organization striving to improve lives and strengthen communities on Cape Cod, Martha’s Vineyard, and Nantucket. The United Way family — of donors, volunteers, and citizens who care – raise money, leverage resources, and donate time and talents to not only provide a safety net for those in need, but to create a collective community vision and drive sustainable change. Out of every dollar raised by the Cape and Islands United Way, 99 cents stays on Cape Cod and the islands, while less than 1% goes to the United Way world organization to cover the cost of its membership fee.

They fund projects that align with their Annual Community Impact Agenda and that specifically advance their community goals in HEALTH, EDUCATION, FINANCIAL STABILITY, and HOUSING. For a list of the most recent Cape & Islands United Way Grants awarded please visit www.capeandislandsuw.org.